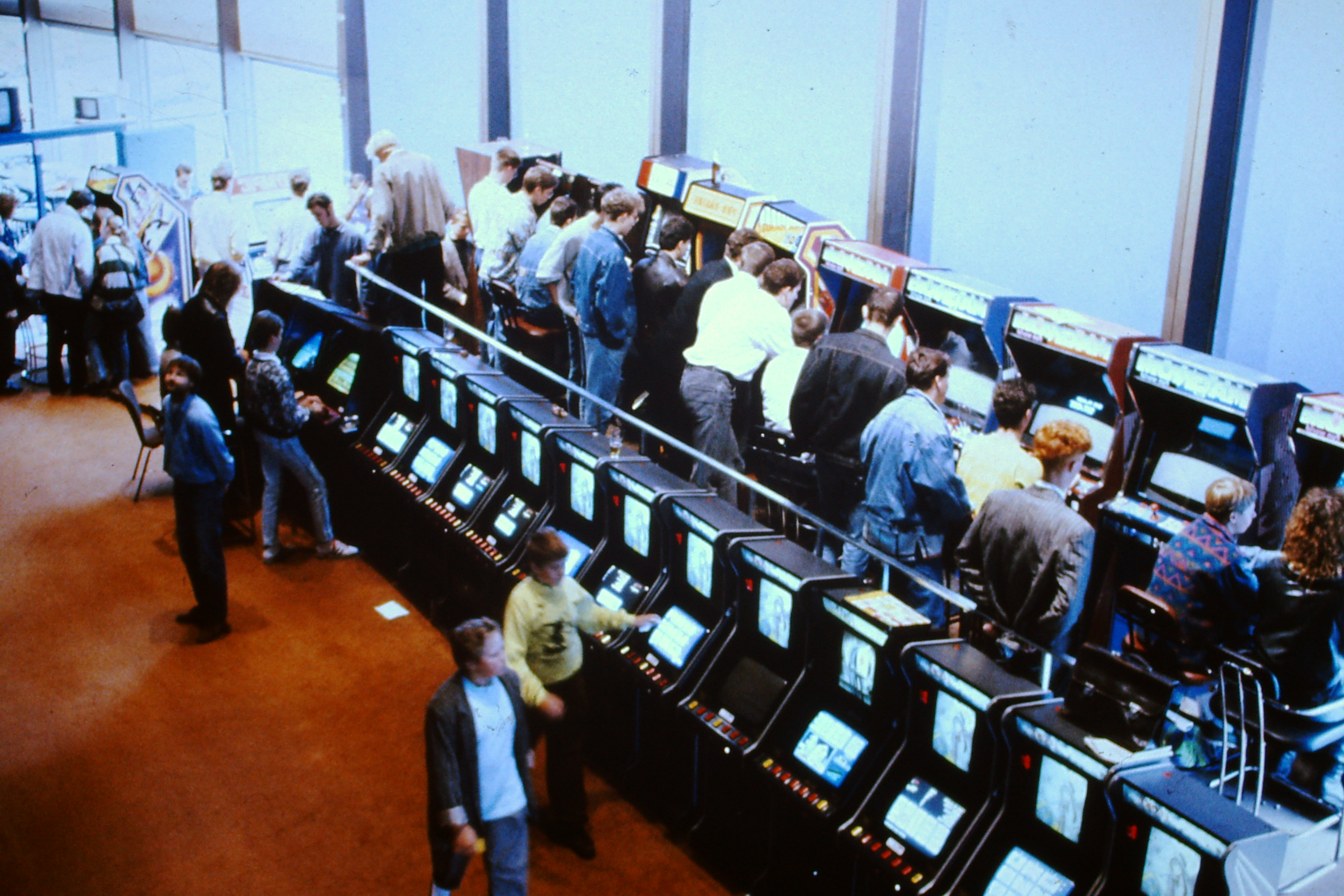 40 years after the founding of STWST, it is time to think about archive and history. The digital storage possibilities brought us the first “sampled” seconds in the electronic media. This changed the entire cultural development of that time. Since their founding in 1979, the artists of Stadtwerkstatt have been working across the borders and linking all things crosswise. This was also reflected in the self-referential, interactive television shows which under the name STWST-TV have exhibited annually at Ars Electronica since 1987. With these shows, the state of “push media” was critically questioned in the mid-1980s. STWST envisions the social media of our time with its early pursuits of the digital internet pull media.

From the mid-1990s onwards, two independent media associations, Radio Fro and servus.at, came out of STWST and remain active in STWST. With an increasingly critical attitude towards the Internet, STWST proclaims “art after the new media” in its initiative New Art Contexts. 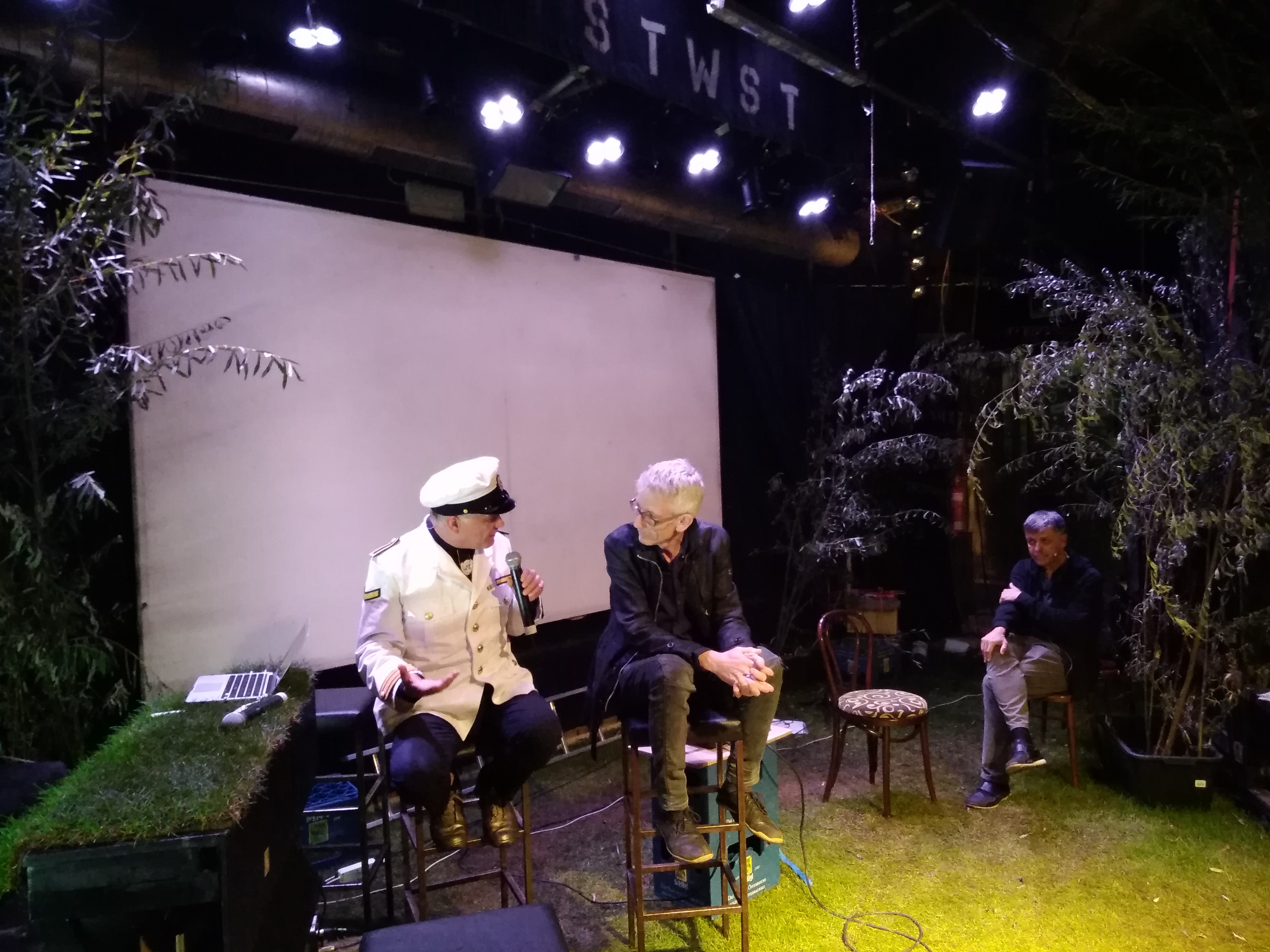 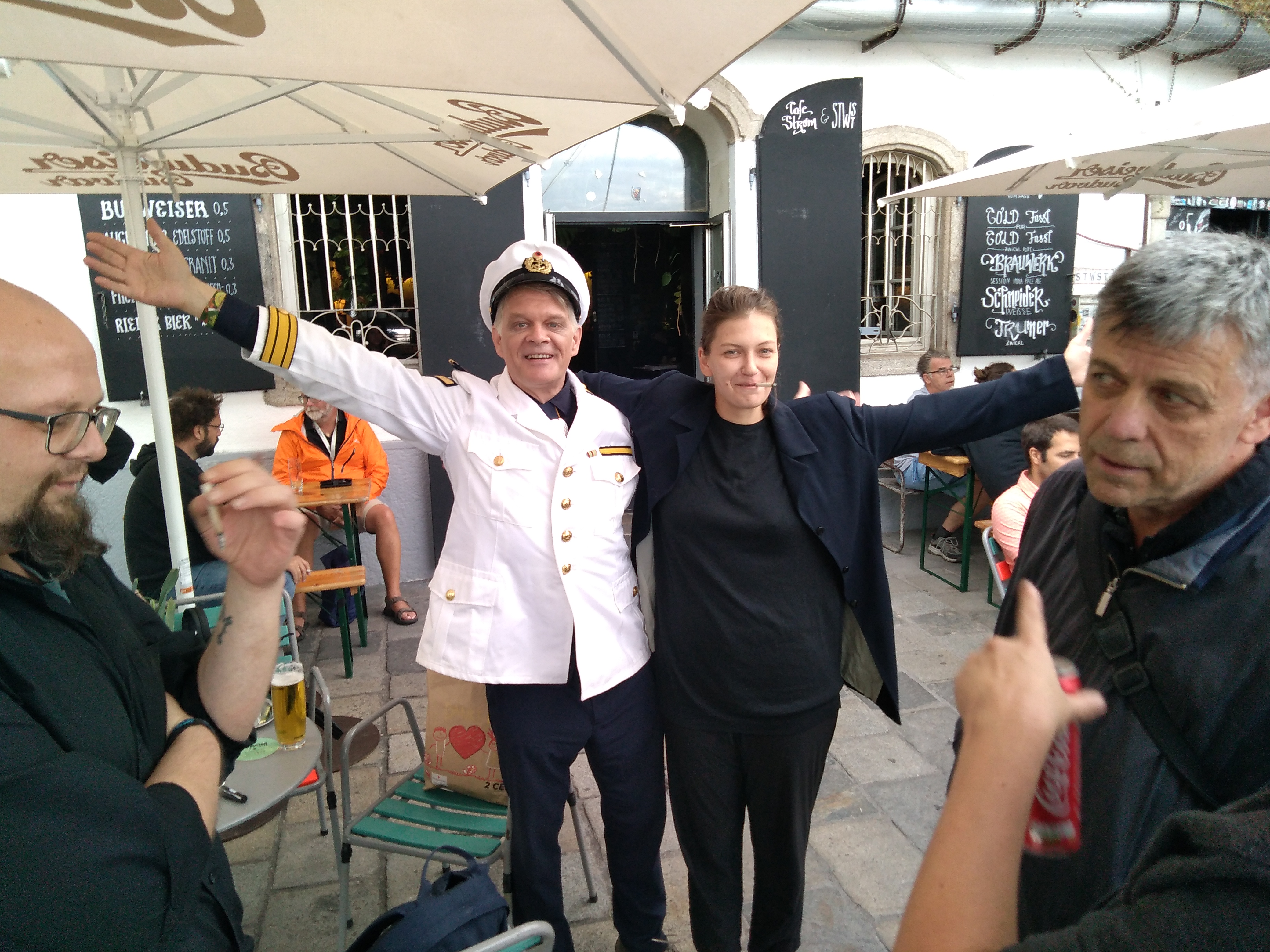 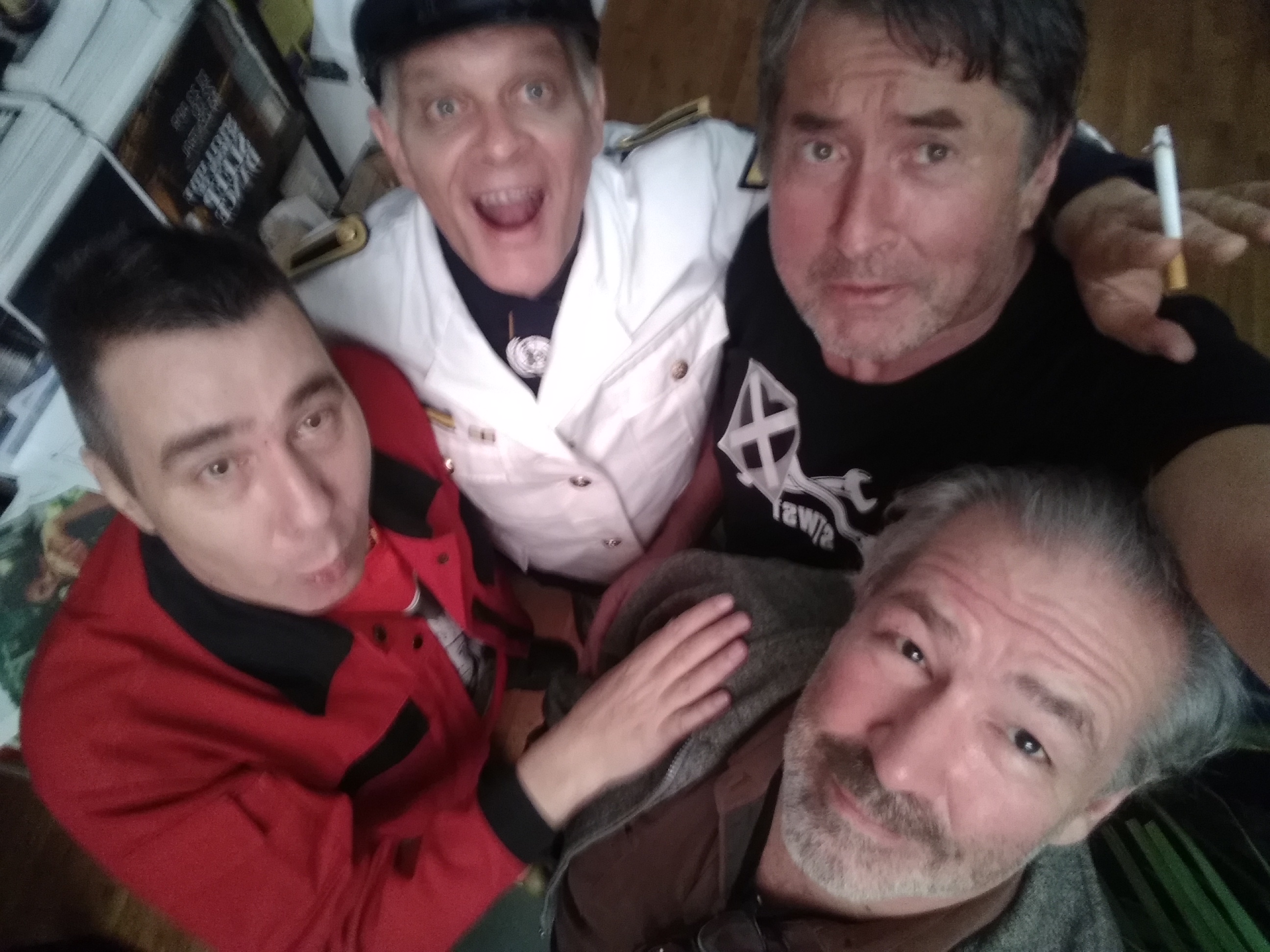 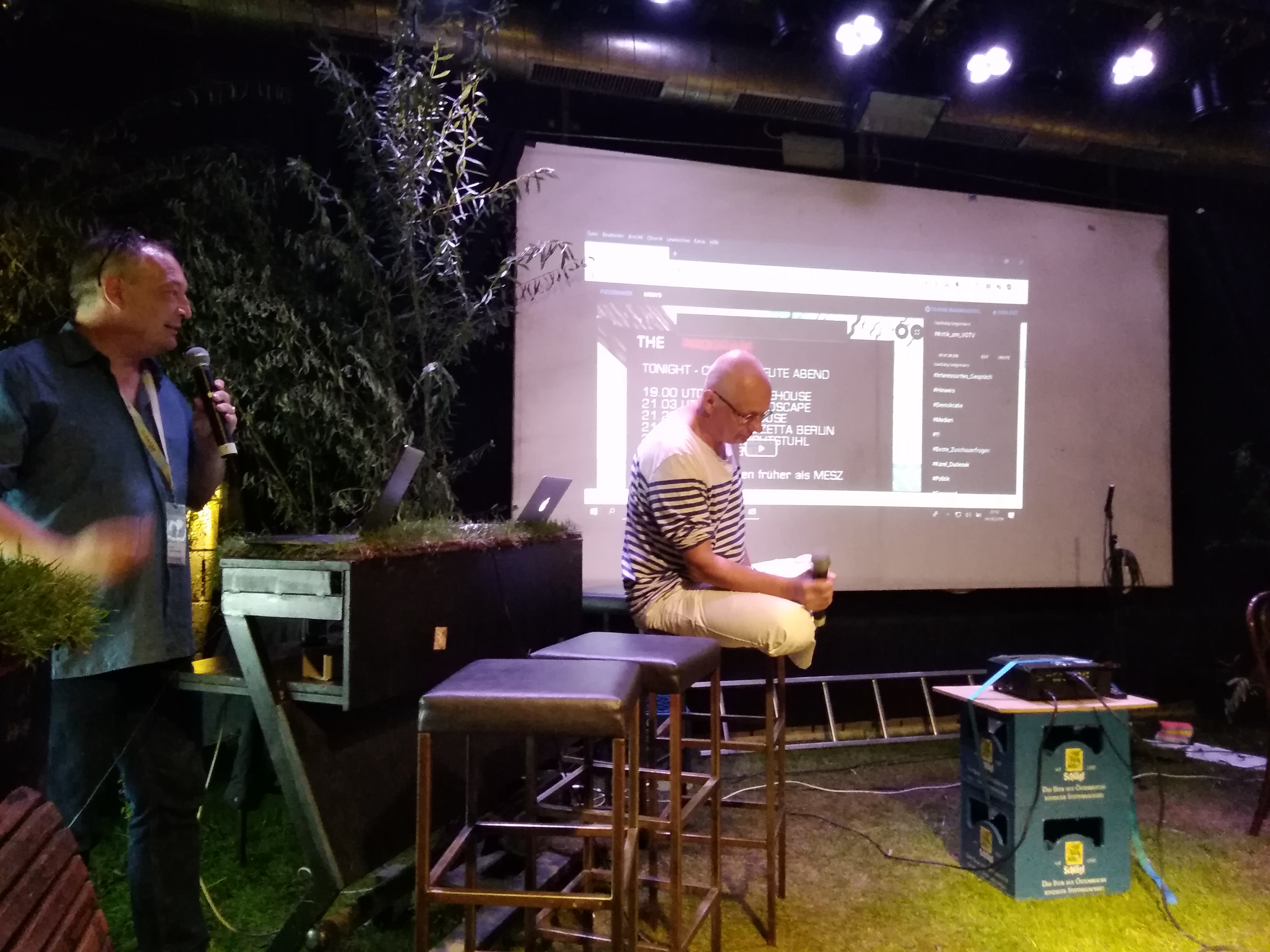 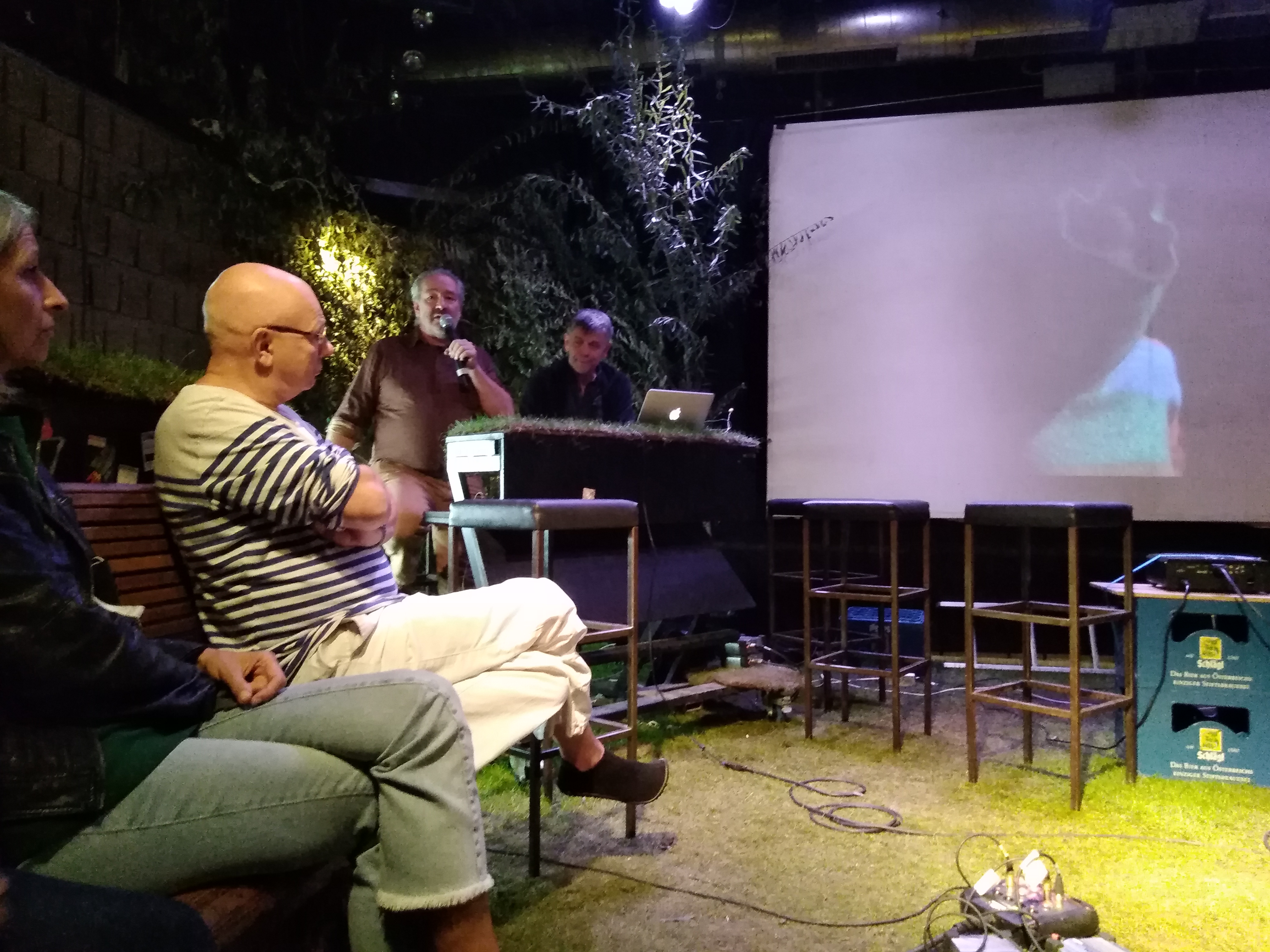 Captain Mnemo is a TV project initiated by STWST. It will start at STWST48x5 STAY UNFINISHED and will be continued as Captain Mnemo at Stadtwerkstatt's Eleonore TV.

Leo Findeisen completed master studies in theology and philosophy and studied composition at the Vienna Conservatory. His research foci include phenomenology, constructivism, theory of communication practices, actor-network-theory, media theory and media archeology, and relations of art and language. He is especially interested in interdisciplinary collaborations between art, architecture, media and science. From 1996-2001, he was a lecturer at the Chair for Philosophy of Culture and Media Theory at the Academy of Fine Arts Vienna, where he subsequently held the position of an assistant professor. He is a co-founder of Transforming Freedom.org – Open Archive for Digital Culture, and a co-founder and the former art & science director of “X-OP”, the Transeuropean Network for Media Artists and Producers, to the application to EACEA, Brussels. He was also a Jury Member for Europan 6 - In between Cities 2001, a member of the Advisory Board for the Prix Ars Electronica – Digital Communities (2007-09) and a jury member for the Vilém Flusser Theory Award, Transmediale 2010.

Agnes Blaha, born 1981, holds a PhD in art history and has been working as a freelancer in statistical data analysis and web programming and occasionally as a translator for English and French nonfiction since 2011. Current projects include: Programming of a web game based on video and photo footage created at the Lala Festival 2019 in Ovendorf (Germany); Upgrade and relaunch of the homepage and associated web shop of Fotohof Salzburg, an artist-driven photo gallery; Server administration and data migration for SERI (Sustainable Europe Research Institute) Vienna. Former project partners and clients include the Department for Migration and Globalization at Danube University Krems, KARO software developers Berlin, Mindfactor IT Solutions, Otto Wagner hospital Vienna, Arkturus personnel consulting on behalf of Wien KAV (umbrella organization of public hospitals in Vienna) etc. Publications and lectures on network analysis in the context of contemporary artists’ publishing, on digital archives, and on 20th century historiography.

Marko Košnik (1961), polymedia artist, started his carrier in 80's Slovenia, producing creative environments, open labs and media platforms, dealing with the synchronization of authors from different backgrounds and self-organization. In 1986, he founded Egon March Institute, a creative unit for theory and research in the field of arts, producing (as of 2018) 67 productions through 16 countries from Mexico over Europe to Japan, joining over 30 international artists and experts in various collaborations. He acts as concept developer, interactive installation artist and live performer and specializes in video and sound instrumentalism. His latest productions include an installation with real time access to video surveillance systems in public space (Kino Siska center, Ljubljana, 2015), and cloud navigation of midi-controlled robots for live interaction with performers onstage (Kapelica Gallery, Ljubljana, 2016).

Urška Škerl, 1989, is a landscape architect and an urbanist. Main interests are the relations between formal and informal architecture and open (public) space. She takes architecture as a measurement for reality, the embodiment of otherwise unseen relations and explores those in writings for the Journal of Biourbanism, House magazine and Radio Student - to think Architecture. Landscape and architecture visions can be seen in projects such as Memory through light (Landscape architecture biennial - student exhibition), Cranes as the Architecture (Future Architecture), Empty Houses of Slovenia (for the municipality of Ljubljana), and People? (IFLA). Her current project STAL is about an interactive SEET, an IoT chair that is an ambivalent piece, a medium, a vortex and a symbol of the smallest architecture unit for the occupation of space and a role in society.

Dr. Tilman Baumgärtel is a writer. He lives in Berlin and teaches media
studies at Hochschule Mainz. Previously he was a professor at the
University of the Philippines in Manila (2005 - 2009) und at the
Department of Media and Communication at the Royal University of Phnom
Penh (2009 - 2012). He has written or edited nine books on various
aspect of media culture, including internet art, computer games, media
piracy, the aesthetics of loops and the director Harun Farocki.